Spain provides everything you need for the perfect beach vacation: beautiful weather, a culture that loves to enjoy life, and a seemingly endless array of beach environments. Its peninsular location in Europe gives it two coastlines: one along the Atlantic and one along the Mediterranean. Beyond those two coastlines, and beyond continental Spain, the beaches of the Balearic Islands (especially on Ibiza and Mallorca) and places like Gran Canaria in the Canary Islands are some of the world’s best. These island archipelagos are also part of Spain.

Spanish beaches come in all shapes and sizes, from secluded coves surrounded by pine-covered cliffs to wide, crowded spaces lined with plenty of restaurants and resorts. Find the country’s best stretches of coast with our list of the best beaches in Spain.

Located on the Catalonian coast in northeastern Spain, the Costa Brava area delivers rugged beauty (the name means “rough coast”), with many serene beaches surrounded by high cliffs. Aside from the beaches, it’s a great part of Spain for sightseeing, as it’s filled with a long history and rich culture.

Tossa de Mar is an ancient town, midway between Barcelona and the French border. It has a beautiful, curved beach with a bonus: there’s a large castle on the hill beyond the beach. The sand here is coarse and dark golden brown, with a large area of the bay roped off for swimming.

Beyond the beautiful beach, attractions in the area include Roman ruins, as well as several nature preserves. The Gran Hotel Reymar & Spa is in the little town of Tossa de Mar, up on the hillside, overlooking the bay. Some of the rooms and suites (try for one on a high floor) have sweeping ocean views. It’s a short walk to the beach or into town. Added value amenities include free Wi-Fi and a free breakfast.

Formentera, Ibiza’s neighboring island in Spain’s Balearic Islands territory, is far more beautiful and peaceful than fun-loving Ibiza. You can go back and forth between the islands via ferry — the ride takes about 30 minutes. Beaches like Es Pujols offer both bright, white sands and dreamy blue-green water. It’s no deserted island — the beach is fronted by a pathway lined with cafés and restaurants, and beyond the beach there’s a vibrant little town.

The Castavi Apartments are steps from the beach in Es Pujols. The units are large, with full kitchens, and there’s an outdoor swimming pool. In addition to its proximity to the beach, it makes a good base for sightseeing around the island. The building has a little snack bar and a front desk with 24-hour staff who can help set up activities and excursions.

No list of Spanish beaches is complete without a mention of those found on the Canary Islands. Another Spanish territory, these islands are almost 60 miles (95 kilometers) off the coast of Africa, in the Atlantic Ocean. The two main islands are Tenerife and Gran Canaria.

The beach is golden brown with a gentle slope towards the sea. There are many beach clubs that rent beach chairs and umbrellas and have their own little fenced-off areas. The Hotel Riu Palace Maspalomas overlooks the incredible dunes of Maspalomas (and the ocean beyond), which look like a Martian landscape. The luxury resort is open year-round (some Canary Islands hotels close for the winter) and is located within a huge oasis of gardens, about a 15-minute walk from the beach. 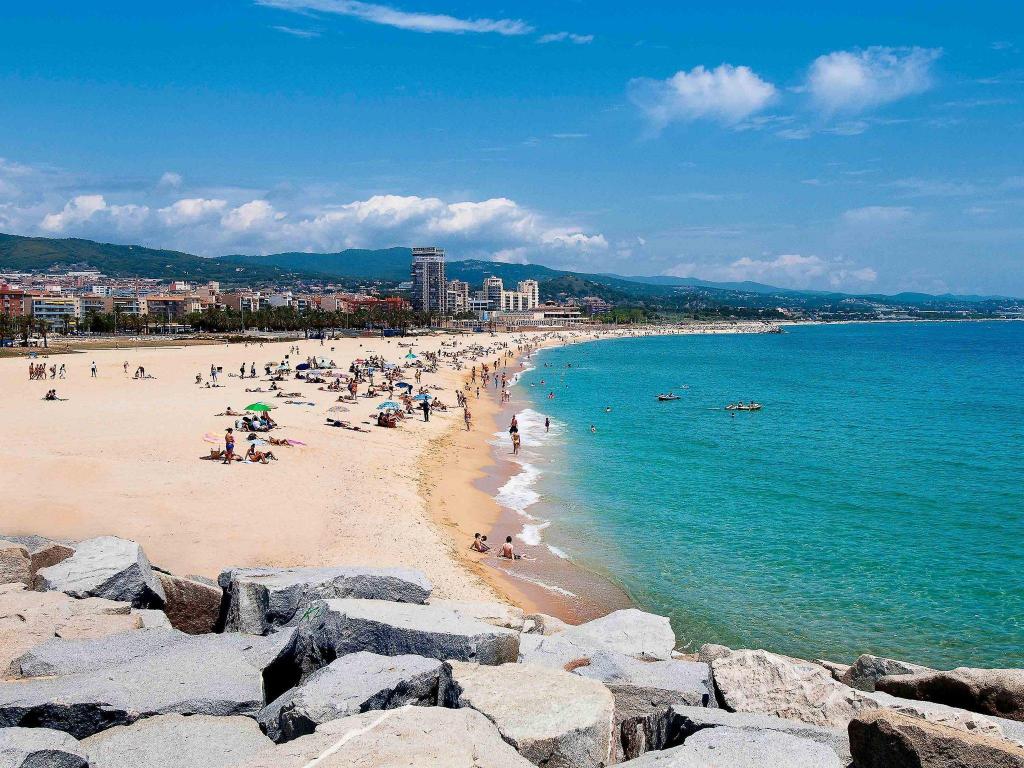 Barcelona is Spain’s second largest city, and it sits right on the Mediterranean coast. The coastline in and around the city is lined with beaches. Bogatell is within the city limits but less crazy than the city’s main Barceloneta beach. Bogatell, a man-made beach, was created for the 1992 Olympics, so it’s well-designed and clean. There are lifeguards on duty and basic facilities (bathrooms and showers) every few hundred yards along the beach. It’s a wide, flat beach with coarse, brown sand.

The Ibis Styles Barcelona City Bogatell is a good mid-range choice in the area. It’s a 10-minute walk from the sand. Locals also enjoy the beachfront neighborhood of Castelldefels.

This beach is 20 minutes by train from downtown Barcelona and right across from a train station. It has miles of wild beach, but still plenty of tapas places and beach shacks for food. It’s popular for swimming, as well as windsurfing and kitesurfing.

Another of the Balearic Islands (like Ibiza), Mallorca is the largest and most developed. Despite its popularity and development, it’s still possible to find some hidden beach gems. Cala Mesquida is on the northeast coast and just starting to be discovered by international tourists. The small bay has a quarter-mile-long beach with fine sand. There are chair and umbrella rentals but only one restaurant and one snack stand. Showers and bathrooms are also available, but no changing areas. Beyond the beach there’s a small town.

Located in the hills above the little town, the VIVA Suites & Spa is an adults-only (over 16) upscale boutique resort. The resort focuses on wellness, with a nicely appointed spa and a very healthy menu. The hotel is a bit isolated, perfect for those seeking a more peaceful, private experience.

Pass up the resorts on the crowded Costa del Sol and head to the next part of the coastline, the Costa Tropical. There’s a much better mix of development and preservation of natural beauty. The primary resort is Almunecar, which feels like a seaside town in the South of France. There’s a long, curving beach fronted by a promenade and street lined with shops, restaurants, and hotels. There is also a row of mainly restaurants along the beach itself.

The beach has soft white sand, and the water, especially in the summer, is quite warm. There are many places to rent beach chairs and umbrellas with private beach club areas fenced off. It’s a good beach for families and for those who want to enjoy the water. Swimming areas are roped off, and lifeguards are on duty during the summer months. Beyond the beach, attractions in the Andalusia region include beautiful and historic Spanish cities like Seville and Granada.

The Playacalida Spa Hotel has a huge, rooftop infinity pool and an overall design inspired by a Moorish castle. The resort is on a hill, with beautiful views of the blue water below, a bit outside the tourist zone. It’s great for families, with three swimming pools and a kids’ club activity program.

On Spain’s north coast, near the French border, the Cantabria region has more than 60 beaches along its beautiful Atlantic Ocean coastline. Laredo is Spain’s outdoor water sports capital, popular with surfers, windsurfers, kitesurfers, and jet skiers. The beach is about five kilometers long, curving along a picturesque bay. The beach area itself is wide, with very fine, soft white sand. It’s all about fun on the beach and in the water: there are many places to rent all kinds of water sports equipment. You can also take lessons and try something new. The region is also popular with foodies due to its Basque cuisine. Attractions inside the town include some Roman ruins.

The Cosmopol is a budget, non-smoking hotel right on Laredo’s main street. The rooms on the upper floors have great views of the ocean (try to get one with a balcony). It’s a few blocks away from the beach. Guests can enjoy the free buffet breakfast, as well as free Wi-Fi.

Asturias is a region in northern Spain, also on the Atlantic coast. Most beaches here are white, sandy, and wild, surrounded by rocky cliffs. Playa de Torimbia is a stunning, secluded beach, close to the port of Llanes, west of Bilbao. It’s a raw, wild beach, with no shops or food, but it does have lifeguards on weekends during the summer season, and showers are available.

This Spanish beach is accessible by car, although parking can be difficult during the summer. You can walk here from the village of Niembro (park here). Aside from the beaches, Asturias is a great region for sightseeing, as it was an important part of both medieval and Moorish Spain. The Hotel Miracielos is close to Niembro in Barro, which has a few nice beaches of its own. This family-friendly hotel is on a green hillside, overlooking just one of the many small beach coves in the area. The stylish, newly-built hotel offers rooms and suites with full kitchens and furnished balconies.

Almeria is in southeast Spain on the Mediterranean Sea. The city is dominated by a Moorish castle looming on a hilltop. Close to Almeria, the resort town of Carboneras is known for its beautiful beaches, which are surrounded by a huge nature preserve. The area is also known for its food, mainly fresh seafood. There are a few beach areas around the bay, which extends quite far into the land. Beaches in front of the hotel have beach chair and umbrella rentals, but a more natural experience can be found just by walking a few minutes down the sand.

The water is warm, and the sand here is tan and slopes down towards the waterline. The beach is bordered by palm trees and raised dunes, topped with a beachfront walkway.

The Hotel CH Cabo de Gata is a modern hotel located on the hillside in Carboneras overlooking the sea. Rooms and suites all have furnished balconies or patios with sea views. The hotel is named for and close to the Cabo de Gata-Níjar Natural Park. The park is filled with a lot of volcanic geologic formations and a large area of salt flats.

Benicassim is known as Spain’s music beach and deserves a mention if only for its huge, annual music festival. The multi-day concert, held on the beach, attracts several hundred thousand people each July, along with the top names in the music business.

The city itself is a modern, Mediterranean resort, with wide, sweeping beaches and a highly developed beachfront promenade. Torreon Beach is a peaceful, laid-back section, perfect for relaxing in the sun. All the beaches in Benicassim are very wide, stretching several hundred yards to the waterline at low tide. They’re also very flat.

The Thalasso Hotel Termas Marinas El Palasiet is a boutique resort hotel on a hill overlooking the city. The spa hotel is a five-minute walk from the sea and offers an extensive thalassotherapy treatment menu. Thalassotherapy is the use of seawater in wellness treatments